Silybum marianum, commonly known as Milk thistle or St. Mary’s thistle, has been used to support liver health for over 2000 years. Learn about MZ 80, the specific extract used in Legalon.

Silybum marianum, commonly known as Milk thistle, has been used to support liver health for over 2000 years.1 Because of this, there are many Milk thistle preparations available in the market which may vary due to growing, harvesting, extraction and production methods. This may also result in varying amounts and bioavailability of the primary active constituent – silymarin and its major component called silibinin (also known as silbin or silybinin).1

In Legalon®, a specific extract of Milk thistle is used – called MZ 80. Legalon with MZ 80 has been developed using a patented production process to allow for easier absorption of silibinin and has been extensively researched in clinical trials and scientific studies to support healthy liver function.

Discover more about MZ 80 used in Legalon and the key studies that support its benefits.

Silybum marianum, commonly known as Milk thistle or St Mary’s thistle, is a herbal remedy that is commonly used to support liver health.

More about Milk Thistle in history

Silybum marianum is a familiar thorny plant that’s prickly leaves contain splashes of white, which were historically referred to as “Mother Mary’s milk”. This is how the nickname milk thistle came to life.

Native to Europe, the value of Silybum marianum has been known for at least 2000 years as an important medicinal herb. However, it wasn’t until the 1960s, that the biochemical composition of Milk thistle was identified at the Institute for Pharmaceutical Biology, Munich.2

Following this discovery, Legalon was developed using a specific extract of Milk thistle, known as MZ 80. Legalon with MZ 80 has been extensively researched to support healthy liver function and has been recommended to millions of people worldwide for over 40 years.8-15

The Legalon extract of Silybum marianum is known as MZ 80 and has been extensively researched over the past few decades to support liver health. Research suggests that it can help protect liver cells against day-to-day toxins and damage.

Silymarin is the primary active constituent in the Silybum marianum plant and has three principle components, known as flavonolignans (silibinin, silychristin, and silydianin).1

The specific extract in Legalon is made using a patented production process to help ensure the primary active constituent, silymarin, and its key components (specifically silibinin) are  more easily absorbed.

The below graph shows the blood plasma concentration (a measure of absorption) of the active component (silibinin) for three milk thistle preparations including MZ 80. MZ 80 was shown to have high levels of bioavailability resulting in high plasma concentration of silibinin in less than two hours.3

Research on how MZ 80 works

Your liver is vital to your health and wellbeing playing many roles in your body.

Research studies suggest that MZ 80 in Legalon works in a number of ways to support healthy liver function.

Learn about the ways MZ 80 can support liver health

Legalon with exclusive extract MZ 80 has been studied over the past few decades in more than 5500 patients worldwide.8-15 The below is a selection of clinical studies conducted with MZ 80 to support liver function.

in subjective complaints of:

*The number of Legalon capsules was subjective based on trial recommendation, with the average being 4 x 70mg tablets (equivalent to 2 capsules of Legalon).

vs. placebo help to:

Always read the label. Follow the directions for use. If symptoms persist, talk to your health professional.

Natural healthcare products containing Milk thistle can vary considerably depending on how they are produced. The specific MZ 80 extract used in Legalon is the result of a highly controlled and patented production process with careful consideration at every stage of creation. This helps to ensure that the final product is high quality with consistency of active components,  consistently reliable, and researched in clinical trials and studies.

That means, you can be sure that the product you are getting contains the same specific extract demonstrated in clinical studies to support liver health. That’s the Flordis difference.

MZ 80 in Legalon: A Summary

Over 30 years of research

By millions of people for over 40 years. 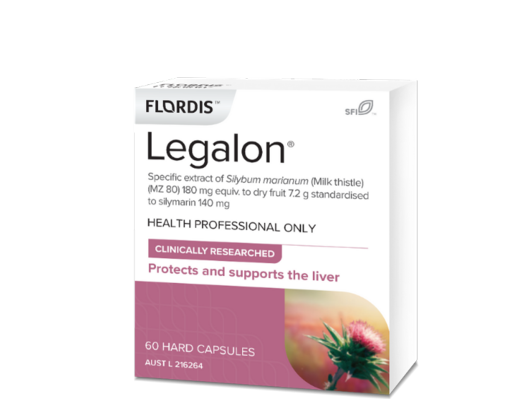 Protects and supports the liver

Our source to patient philosophy

We make sure our natural medicines are consistent.

Not only do the clinical studies on our products demonstrate real health outcomes, they demonstrate the results you can expect from the same products you see on shelf. It’s all part of our Source to Patient philosophy.

See the steps taken to make our products